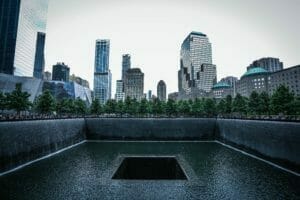 This year marks the 20th anniversary of a day that will go down in history as a day of infamy.  On September 11, 2001, our nation and way of life were attacked.  They weaponized four commercial airplanes and flew two of them into the World Trade Center, a global business complex in New York City.  One plane was used to target the Pentagon, the defense headquarters of the United States.

I remember where I was that day.  I was the Security Manager for my squadron at Langley Air Force Base, in Hampton, VA.  I remember the disbelief I felt initially until I realized it was not a joke.  Then I heard the high-pitched sound of the F-16 fighter jets as they scrambled to provide support.  And I vividly remember the reassurance I felt watching President George Bush at Ground Zero as he told America, “I can hear you! I can hear you! The rest of the world hears you! And the people who knocked these buildings down will hear all of us soon!”  Thousands of years ago, there was another terrorist who disrupted our way of life.  Man was created in God’s image, free from the power of Sin.  But on a fateful day, Satan entered the Garden of Eden through the serpent.  “Wherefore, as by one man sin entered into the world, and death by sin; and so death passed upon all men, for that all have sinned:” (Rom 5:12).

And so Sin terrorizes us, from the time we enter this world until we take our last breath.  The terror of addiction, the terror of depression, the terror of violence, the terror of infirmity.  But God had a plan to rid us of the terror once and for all.  “That as sin hath reigned unto death, even so might grace reign through righteousness unto eternal life by Jesus Christ our Lord” (Rom 5:21).  Just as the passengers of the fourth plane refused to be used as a weapon and decided to fight, saving countless lives, God sent His only Son to die—saving countless souls.  “For God so loved the world, that he gave his only begotten Son, that whosoever believeth in him should not perish, but have everlasting life” (Jn 3:16).  Jesus died so we could live—free from terror!

So, on this 20th anniversary of the attacks of 9/11, never forget that Christ died so that you can live.  No more terror, no more concern, no more condemnation.

If you enjoyed this blog, come join us for Christian Education to hear more.  Sundays – 9:30 am.  We will be teaching you how to live free from terror.